Two new job creating projects have received support under the Local Jobs Fund which will help attract new investment to the Territory, create new industries and boost our local economy.

Earlier this week the Northern Territory (NT) Government announced they will partner with leading Australian telecommunication company Vocus to upgrade the Territory’s existing fibre-optic cable network from 400 gigabit to 20 terabits.

$7.9 million from the Local Jobs Fund will be invested into this joint project, with Vocus investing $10 million to upgrade fibre-optic cables across the Territory.

This project will bring the NT in line with telecommunications infrastructure Australia-wide.

The massive increase in the volume and speed of digital services will mean faster internet speeds, attracting new business to the Territory, attracting private investment in data centres - creating a new industry for the Territory and a direct fibre-optic link to huge technology hubs in Singapore and South East Asia.

Vocus Group MD and CEO Kevin Russell said, the Terabit Territory is a game-changer for Vocus and the Territory, establishing Darwin as a major new gateway for capacity from Asia to other mainland capital cities.

“This major upgrade to Vocus’s fibre infrastructure will deliver a new level of competition in the Territory and substantially increase capacity from Australia’s north-west to other capital cities.

“This infrastructure will open up the market by providing more competitive pricing to major metropolitan areas - and position Darwin as a market for new technologies such as edge data centres and hyperscale cloud facilities.”

Since 2014, national and international commercial aircrafts have been stored or serviced at the Alice Springs facility where previously, aircraft storage services were almost exclusively undertaken in the United States.

This investment will see the expansion of the existing Alice Springs facility to increase storage capacity from 20 to 50 aircrafts in response to industry needs and global economic factors resulting in increasing occurrence of assets being grounded.

The Local Jobs Fund investment into this project will create 21 direct jobs over the next 12 months and will directly boost the Territory economy by $5.8 million - with a further flow on effect of $5.2 million.

For more information about the fund, go to the Local Jobs Fund website.

Tourism Resilience Plan for the NT 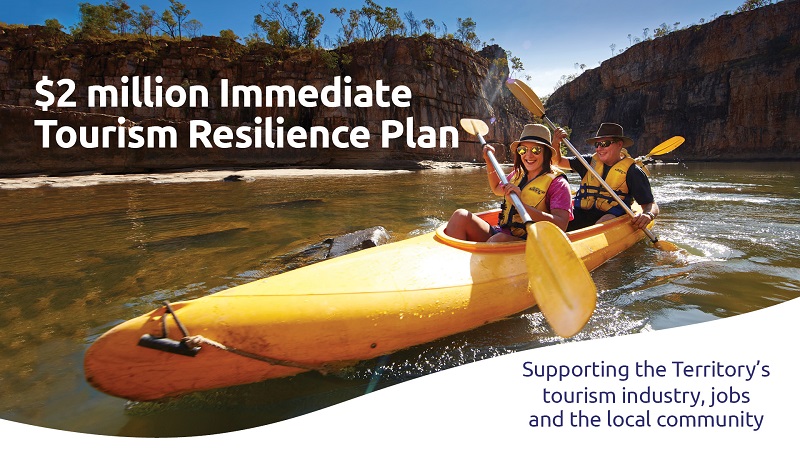 The Northern Territory (NT) Government has released a $2 million Immediate Tourism Resilience Plan to minimise the impacts of the Australian bushfires and Coronavirus outbreak on the Territory’s tourism industry.

Both of these events are seeing significant altered travel plans for potential visitors to Australia, directly impacting the Territory’s tourism industry.

The plan aims to maintain the momentum with attracting more visitors to the NT and will see funding directed to targeted tourism marketing and industry initiatives.

There are four new programs incorporated under the Immediate Tourism Resilience Plan, they include:

Chair of Tourism NT Board of Commissioners, Michael Bridge encouraged operators to take advantage of the support packages being made available to them.

“It has never been more important for our NT operators to stay abreast of trends and we will be doing our best to communicate the latest developments to our industry, so they can adapt accordingly.”

To find out more about the Immediate Tourism Resilience Plan, go to the Tourism NT website.

Territory businesses are invited to have their say and help shape a sustainable future for our local seafood industry.

The Northern Territory (NT) Seafood Council have released their sustainability strategy survey to better understand what the most pressing issues facing the industry are and help create positive change.

The NT Seafood Council Chairman, Mr Daniel Kimberley said “We are determined to take a leading role when it comes to sustainability, and are calling upon everyone who has an interest in NT waters and NT seafood to complete the online NTSC sustainability survey.”

“Professional fishers recognise that sustainability issues need constant attention, and with over 25% of our fishing grounds occurring in marine parks industry recognises we need to do a better job to ensure a united and proactive approach, which is why the NT Seafood Council is progressing industries first sustainability strategy.

“It is important that we hear from all our stakeholders, including the NT community as this will ensure that the strategy is well informed on the sustainability issues that matter most.”

The online survey takes around 20 minutes to complete, and is open until 1 April 2020.

Input from the survey will guide the thinking and the development of action plans for the entire NT Seafood industry.

Have your say her, complete the NTSC sustainability survey.

Emma Mahoney was something of a pioneer when she became an aircraft engineer 20 years ago.

“I knew of only one other woman in the industry in Australia,” she says.

Times are changing as an increasing number of women enter what is a secure, well-paid trade - but 98.1% of aircraft engineers are still men.

Emma, who has just settled in Darwin as Aviation Australia’s Territory trainer and exam assessor, says: “We’re trying to break down barriers and show girls that there is no reason why they shouldn’t enter the industry.”

She is training 24 year 12 students and is expecting 38 new registrations this term - and there are approximately 50 apprentices from private companies.

Emma holds training classes in Alice Springs on Monday and Tuesday and in Darwin on Wednesday and Thursday.

She carries out assessments, exams and appointments in Darwin on Friday.

Her translocation to the Territory from Queensland means that Northern Territory (NT) apprentices no longer have to travel to Cairns to sit exams.

“That saves their employers a lot of money and time,” Ms Mahoney says.

Industry and the Territory Government are strong supporters of Aviation Australia.

Chartair provides a training hangar in Alice and CareFlight in Darwin.

The NT Government’s Department of Education has increased the number of school training positions it funds for Certificate II in Aviation Engineering from 38 to 75 this year.

It is also supporting the setting up of an examination centre in Darwin.

Much of the apprenticeship training is made possible by a major Skilling Territorians grant from the Department of Trade, Business and Innovation.

The Skilling Territorians initiative aims to maximise job opportunities for Territorians and build a skilled workforce.

It helps employers and businesses support the growth of the Territory economy by improving local capability.

The initiative is part of a suite of job-enhancement programs and services developed by the NT Government.

Based on orders for new aircraft just in the Asia Pacific region, the industry will need an extra 266,000 engineers and 327,000 more general staff by 2038.

“The demand is massive and increasing,” says Ms Mahoney.

He says a full aviation training school should be set up in Darwin.

“The demand is there.”

The NT Government have recently funded an aviation capability study to consider opportunities and are actively working with proponents on expanding the sectors training capability.

A new 10 year plan has been released to support the growth and development of the human services industry in the Territory.

Service providers operate across the Territory, from major hubs to some of the most remote regions and are vital to the wellbeing of Territorians and welfare of our community as a whole.

The human services workforce is a large and significant contributor to the local economy and is one of the fastest growing workforces in the Territory.

The Economic Development Framework (EDF) highlights importance of the human services industry and identified it as one of five developing sectors in the Territory. Development of a human services plan to support the growth of its workforce is a key action item in the EDF.

Last week, the 10 Year Human Services Industry Plan was publically released in Darwin and Alice Springs. The plan is designed to unite efforts across the public, not-for-profit and private sectors so the industry will be well placed to provide Territorians greater choice over the services they receive.

The release of the plan is timely with the industry undergoing significant transformation and demand for services such as housing, health care, social welfare and employment service increasing.

During the development of the plan, more than 340 stakeholders were engaged across 81 different organisations and agencies to identify the industries key priority areas.

Four key themes emerged which included; a connected industry, strong and sustainable organisations, a skilled workforce and quality services. These key themes haven been further broken down into twelve priorities which will be implemented across the public, not-for-profit and private sectors over the next 10 years.

Find out more and get a copy of the plan, go to the Human Services Industry Plan NT website.

A draft environmental impact statement (EIS) for the rehabilitation of the former Rum Jungle Mine site is now open for public comment until 6 March 2020.

The primary objective is to create a safe and stable environment onsite, and reduce environmental impacts. This includes supporting and improving terrestrial and aquatic environmental resources downstream of the site within the East Branch of the Finniss River.

The Northern Territory (NT) Government has worked with the Australian Government and joint Traditional Aboriginal owners, the Kungarakan and Warai peoples, since 2009 to develop and deliver the rehabilitation strategy for the former Rum Jungle Mine site.

Community consultation is an important part of the environmental assessment process and the draft EIS provides more information about the project design and implementation plan.

Completion of the EIS assessment is required to commence the proposed stage 3 of the rehabilitation project. In addition to the EIS, several land use agreements and other approvals are also required to support a detailed business case which is to be submitted to the Australian Government as part of its consideration of funding stage 3 rehabilitation work.

Public comments on the draft EIS are welcome and can be submitted to the NT EPA via:

All submissions will be treated as public documents unless confidentiality is requested.

For more information, go to the Rum Jungle project website. 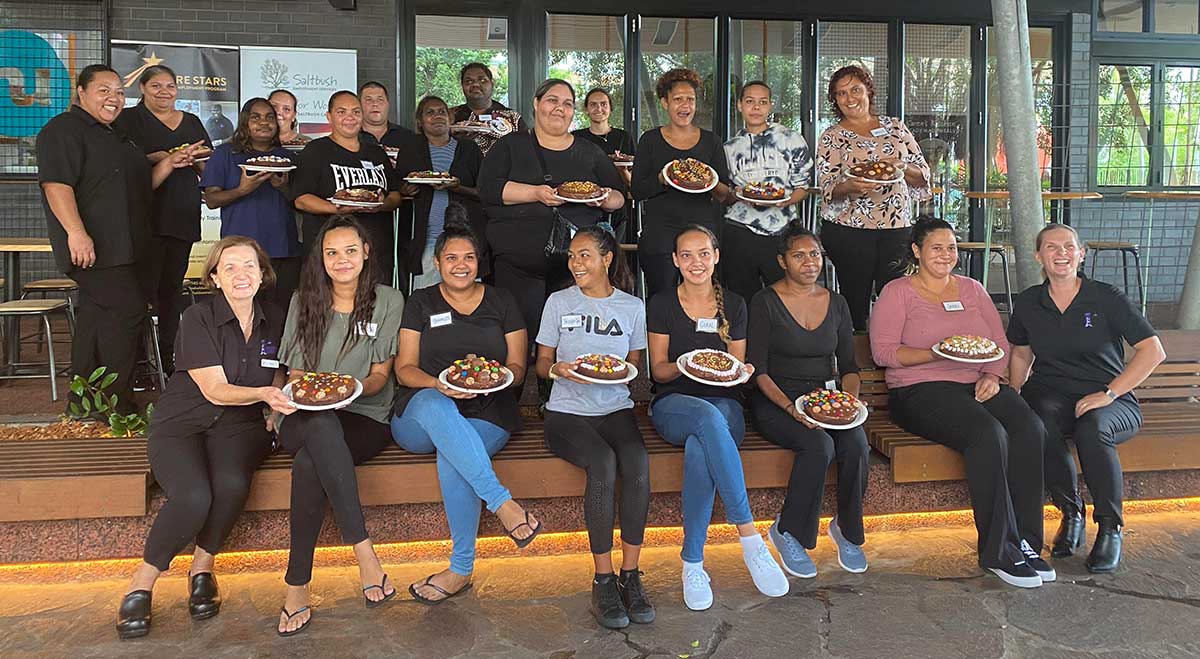 A not-for-profit training hub and café preparing Aboriginal jobseekers for employment has opened in the Northern Territory’s largest shopping centre.

The PuLSE, which stands for Practical Learning Space, is open at Casuarina Square in Darwin’s northern suburbs as part of the Future Stars Indigenous Employment Program.

GPT owners and operators of Casuarina Square are donating the space and providing strong support for the social enterprise, which is another innovative Karen Sheldon Training initiative.

Training Manager Linda Manning says “The project is all about structured pathways to a job. We start by helping Aboriginal jobseekers of all ages to gain confidence and employability skills, then assist them to polish their skills in real workplaces.

“We are extremely grateful to the management at Casuarina Square GPT - without their encouragement and assistance this pilot project would not have been able to launch.”

Successful graduates of the program will be helped to move into employment when they are ready and provided with six months intensive on-the-job mentoring by project partners and Vocational Training and Employment Centre provider, Saltbush Social Enterprises.

Local employment providers are supporting the program and ‘wonderful’ employers have embraced the project with more than 100 jobs in a range of industries pledged for job-ready candidates.